History of the Brahman
According to the American Brahman Association, Brahman Cattle were the first beef breed developed in the United States. They were derived from several Bos indicus breeds of cattle brought into the United States from India between 1854 – 1926. (According to Oklahoma State University’s Department of Animal Science, some of the early Brahman were also likely imported into the United States via circus organizations.) In India, cows are considered holy and are revered, not eaten. The Brahman breed is named after Hindu priests, called “Brahmins,” whose title comes from the Hindu deity Brahma. Today, in the United States, Brahman cattle are primarily used in the meat industry, but they also serve as riding steer.

Why Brahman
Brahman Cattle are one of the most resilient breed of cattle in the United States. They adapt to heat and drought, are resistant to parasites, offer notable reproductive characteristics and have a relatively long lifespan. Within the beef industry, Brahman are known for their carcass yield, with remarkable gain efficiency and “Choice” cut ratings, featuring limited fat and positive tenderness scores. When bred with another species with their own desirable characteristics, Brahman bring heterosis, or “hybrid vigor,” to their offspring. Breeding the Brahman with European or English breed cows produces the highly desired “Brahman F-1” calf. 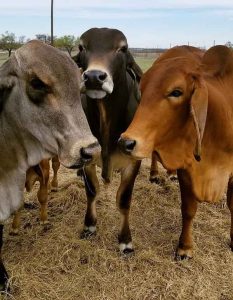 Adaptations Conducive to Drought and Heat
To the general population, the Brahman are likely best known for their neck hump. The hump is actually a network of honeycomb-like tissues that retains water. The water retention enables the Brahman to withstand hot and arid conditions. Their thick skin, along with their shiny reflective hair, contributes to the breed’s ability to hold up against the brutal sun in hot and arid climates.

Data from studies conducted at the University of Missouri underscore the Brahman’s adaptability to heat. Researchers found that European cattle begin to show a decline once temperatures go above 70 degrees Fahrenheit. Decline specifics include a decrease in appetite and milk production. In contrast, Brahman cattle appeared to fare well, with little effect from heat up to, and even beyond, 105 degrees Fahrenheit.

Resistance to Parasites
Parasite resistance contributes to the breed’s overall heartiness. Brahman cattle have thick skin which can protect them from mites, lice, horn flies and the like. The skin also produces a distinctive odor widely believed to assist with repelling insects.

Lifespan and Reproduction
Brahman can live beyond 20 years. Most females produce viable calves up to 15 years of age. Brahman crossed with other breeds produce offspring with the heterosis, or “hybrid vigor,” that predicts stronger calves with longer expected lifespans. These factors contribute to a dependable return on investment on the Brahman.

Scroll back to top